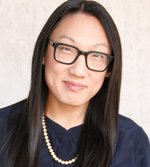 Andy Marra (she / her / hers) is executive director of the Transgender Legal Defense & Education Fund (TLDEF). Prior to TLDEF, she spent five years leading external communications at the Arcus Foundation; managed public relations at GLSEN, a national organization focused on LGBTQ issues in K-12 education; was co-director at Nodutdol for Korean Community Development; and served as a senior media strategist at GLAAD. Andy currently serves on two boards including Freedom for All Americans and Just Detention International. She has previously served on the boards and advisory councils of Chinese for Affirmative Action, the Funding Exchange, Human Rights Campaign, and the National Center for Transgender Equality. Andy has been honored by the White House and the City of New York for her contributions to the LGBTQ community, profiled in The Advocate’s “Forty Under 40,” and listed as one of The Huffington Post’s “Most Compelling LGBT People.” She is also a past recipient of the GLSEN Pathfinder Award, the National LGBTQ Task Force Creating Change Award, NQAPIA Community Catalyst Award, and the Colin Higgins Foundation Courage Award.