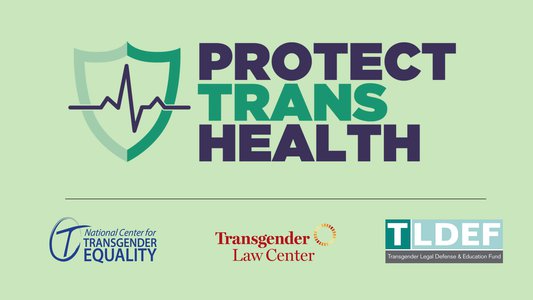 "It's important that our government's policies uphold the dignity of all Americans, especially transgender people who are increasingly disenfranchised," said Rodrigo Heng-Lehtinen, executive director of NCTE. "NCTE has been working hard advocating for trans people's rights for nearly 20 years. We know that trans people are still experiencing discrimination when accessing the health care we need, despite it being against the law. Our 2015 U.S. Trans Survey showed that one in four trans people have been denied care by insurance companies, whether it was routine or transition-related care, just because we’re trans. With this new regulation, the Biden-Harris administration can better enforce the law to make sure trans people get the care we need.”

The proposed regulation holds that discrimination on the basis of sex “includes, but is not limited to, discrimination on the basis of sex stereotypes; sex characteristics, including intersex traits; pregnancy or related conditions.” Additional guidance issued by HHS also notes that denials of health care based on gender identity are illegal, as is restricting doctors and health care providers from providing care because of a patient’s gender identity.

“Accessing necessary medical care is a freedom too many of us have had to defend from certain callous politicians,” said Lynly Egyes, legal director of TLC. “By supporting the Biden administration’s proposed healthcare regulation we can ensure each one of us has the freedom to be ourselves, pursue our dreams, and have a good life — no exceptions.”

NCTE and TLC launched the Protect Trans Health campaign in 2018 in response to the Trump administration’s Rollback Rule. A green light to discriminate against TGNC people, pregnant people, and English language learners, among many others, the toxic rule was vehemently opposed by the public. Coordinated efforts by the Protect Trans Health campaign and advocates led to over 200,000 comments opposing the Rollback Rule. A final rule was issued in 2020 and TLC, TLDEF, and others sued the administration in an ongoing case, BAGLY v. HHS.

The lawsuit asserts that the Trump era rule violates the Administrative Procedure Act by being contrary to law, arbitrary and capricious, and a violation of the Equal Protection Clause of the 14th Amendment. Notably, the discriminatory rule was published on June 19, 2020 just days after the June 15, 2020 U.S. Supreme Court ruling in Bostock v. Clayton County, which found that it is unlawful sex discrimination to discriminate based on sexual orientation or gender identity. The lawsuit also asserts that the Rollback Rule emboldens discrimination towards LGBTQ+ patients and people who are seeking or who have obtained reproductive health care, further stigmatizes abortion and other pregnancy-related care, harms patients who are English language learners, including immigrants and Indigenous people who rely on Indian Health Services (IHS) for healthcare, and harms people with chronic illnesses, including those living with HIV. The rule will also creates confusion about the scope of protections against discrimination under federal law.

"Through TLDEF's Trans Health Project and impact litigation, we see and fight the devastating impacts of the previous administration's policies on the health of transgender and nonbinary people,” said Andrea “Andy” Marra, TLDEF’s Executive Director. “The new proposed rule will continue building on our momentum to strengthen protections and access to the lifesaving gender affirming coverage that everyone deserves."

The comment period officially began on August 3 and will continue until October 3. Commenters will not be required to give their address or divulge their immigration status. Members of the public may post official comments through the campaign website www.ProtectTransHealth.org.

Spectrum: The Other Clinic

The DC Center for the LGBT Community

National Center for Transgender Equality advocates to change policies and society to increase understanding and acceptance of transgender people. In the nation’s capital and throughout the country, NCTE works to replace disrespect, discrimination, and violence with empathy, opportunity, and justice. www.transequality.org

Transgender Law Center (TLC) is the largest national trans-led organization advocating for a world in which all people are free to define themselves and their futures. Grounded in legal expertise and committed to racial justice, TLC employs a variety of community-driven strategies to keep transgender and gender nonconforming people alive, thriving, and fighting for liberation. www.transgenderlawcenter.org