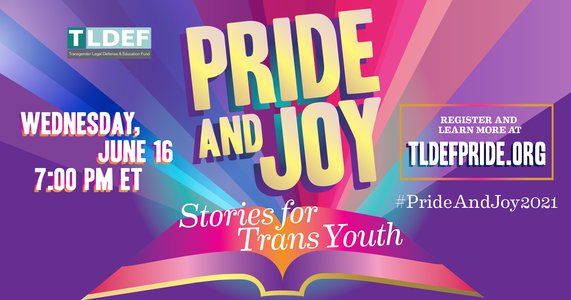 (NEW YORK, NY - June 16, 2021) - Transgender Legal Defense & Education Fund (TLDEF) will host Pride & Joy, its first-ever virtual storytelling event for transgender and non-binary young people, along with their families and friends. The event features transgender storytellers and leaders, and aims to provide family-friendly opportunities to celebrate Pride month, particularly as lawmakers in legislatures across the country consider more than 100 anti-trans bills that would have significant negative impacts on young transgender people.

“In this moment when transgender and non-binary young people are under attack in legislatures across the country, we felt it was important to show them and their families some extra love,” said Andy Marra (she/her), Executive Director of TLDEF. “We are incredibly grateful to the inspiring and talented trans leaders, authors, and storytellers who will be taking part in Pride & Joy, and hope that the event will reinforce for young trans people that they too have bright futures ahead of them.”

Jackson Bird (he/him) is a YouTube creator and LGBTQ+ advocate dedicated to demystifying the transgender experience. His TED Talk “How to talk (and listen) to transgender people” has been viewed over a million times. Jackson is a recipient of the GLAAD Rising Star Digital Innovator Award.

Precious Brady-Davis (she/her) is the author of I Have Always Been Me. She is a true renaissance woman for the ages; as a native Nebraskan she has never lost her Midwestern charm. Lauded internationally as an award-winning diversity advocate, communications professional, and public speaker, she currently serves as the Regional Communications Manager for the Central Region of the Beyond Coal Campaign at Sierra Club.

Senator Sarah McBride was officially sworn into the Delaware Senate in January 2021, making her the first openly transgender state senator and highest-ranking elected transgender politician in history. In 2018, Sarah published Tomorrow Will Be Different. The book recounts her experiences fighting for equality in Delaware and nationally, as well as her relationship with her late husband, Andrew Cray, for whom McBride was a caregiver throughout a battle with cancer that ultimately claimed his life.

Meredith Talusan (she/they) is the author of the critically-acclaimed memoir Fairest from Viking/Penguin Random House, a Lambda Literary Award Finalist. She is also an award-winning journalist who has written for The Guardian, The New York Times, The Atlantic, The Nation, WIRED, SELF, and Condé Nast Traveler, among many other publications, and has contributed to several essay and fiction collections. She has received awards from GLAAD, The Society of Professional Journalists, and the National Lesbian and Gay Journalists Association. She is also the founding executive editor of them, Condé Nast’s LGBTQ+ digital platform, where she is currently contributing editor.

In addition, the audience will hear from:

Currently, more than 100 anti-transgender bills are being considered in states across the country. Most of these bills target transgender young people for exclusion from playing on sports teams that align with their gender identities, and some would ban trans young people from getting the medical care that they need. In Arkansas, which passed one of the healthcare ban bills, there have been reports of families leaving the state.

TLDEF is committed to ending discrimination based upon gender identity and expression and to achieving equality for transgender people through public education, test-case litigation, direct legal services, and public policy efforts. To learn more about TLDEF’s work, visit tldef.org.