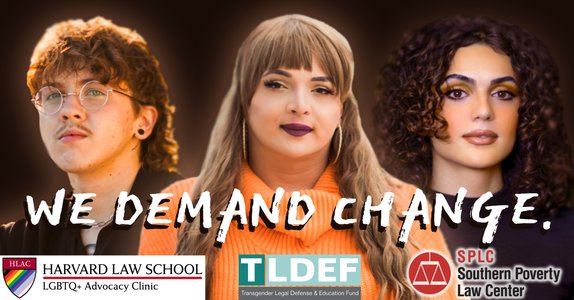 The three plaintiffs are represented by attorneys from Transgender Legal Defense and Education Fund (TLDEF), the Harvard Law School LGBTQ+ Advocacy Clinic, and the Southern Poverty Law Center (SPLC). They have filed suit in the United States District Court for the Southern District of Florida to ensure that Miami-Dade County's policies regarding the health, safety, and dignity of transgender people in custody are brought to meet the standards required by the Constitution and state and federal law.

According to the complaint filed today, because Amaya Cruz, Pallidine, and Torres-Bucci are transgender, officials at Turner Guilford Knight Correctional Center (“TGK”) subjected them to a litany of abuses.

Correctional staff undertook illegal strip searches, called them degrading and humiliating names such as “it” and ”hermaphrodite,” addressed and referenced them using the wrong gender pronouns, threatened their safety, manhandled and physically hurt them, forced them to remove personal accessories that aligned with their gender, isolated them in solitary cells, denied them medical treatment, and required them to wear clothing associated with the wrong gender in order to be freed from jail.

Amaya Cruz and Torres-Bucci are transgender women who were arrested protesting violence against Black trans women; Pallidine is a transgender man who was arrested after protesting after Derek Chauvin murdered George Floyd. All criminal charges against them were later dropped.

“Here, trans people were protesting violence against Black people, including Black trans people, when police and jail staff targeted them for anti-trans and ableist violence,” said Gabriel Arkles, Senior Counsel at TLDEF. “None of them should have been in jail at all. But once there, those charged with enforcing the law should have followed the law themselves and treated our clients decently.”

This mistreatment violated the Constitution’s promise of equality before the law, the complaint says, by singling people out for different and worse treatment because they are transgender.

Counsel for the plaintiffs argue that the county broke numerous other federal and state laws protecting them from discrimination and harm, including among others the Americans with Disabilities Act, the Prison Rape Elimination Act, and Florida statutes on strip searches.

“I felt really uncomfortable, embarrassed, dehumanized and fully erased,” Ms. Amaya Cruz said. “It took me so long to be comfortable with my identity and I worked so hard to build this level of confidence and radiance and power toward myself that when I was in there, I felt like all of my hard work and all of my fight was not important... like it didn't matter.”

The complaint seeks damages for the three plaintiffs for injury suffered in custody and a declaration that the County’s actions violated the law.

Torres-Bucci shared how their horrible experience in custody drove their commitment to driving change.

“I was misgendered and abused by the staff and officers, forced to undergo a humiliating and illegal strip search, and placed in solitary confinement,” they said. “The officers tried to rip my own hair off of my head because they thought it was a wig. We need to make changes to the Miami-Dade Correctional system to end brutality against transgender people, once and for all.”

Plaintiffs and their counsel have recommended changes to jail policies and practices including:

“No one knows what keeps trans and non-binary people safer than trans and non-binary community members,” said Anya Marino, Clinical Instructor at Harvard Law School. “The County needs to update its practices not only to align with federal and state law, but with what the community is saying it needs to ensure members' safety and dignity.”

The lawsuit comes after nearly a year of attempts to resolve the plaintiffs' claims outside of litigation, which were not successful.

Readers looking to show support for the plaintiffs can sign a petition at bit.ly/bucci-petition.