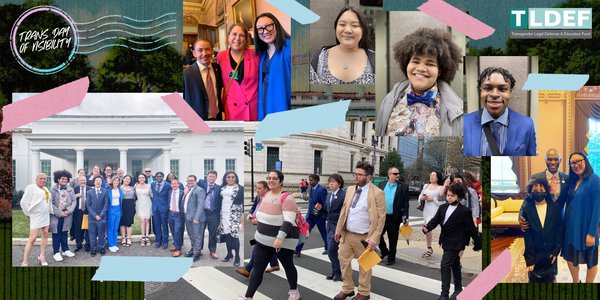 The families were joined by advocates from transgender and LGBTQ+ rights groups and surprise guests including Jeopardy! champ Amy Schneider.

Organized by the White House at the request of Transgender Legal Defense and Education Fund (TLDEF), and coordinated by fellow advocacy groups the National Center for Lesbian Rights (NCLR), the National Center for Transgender Equality (NCTE) and PFLAG National, this afternoon of celebration was the first time a Presidential administration has hosted an official event to mark this day of awareness and celebration of transgender and non-binary people.

“I was just at school and my mom texts me like ‘you’re going to the White House! And I was like ‘the WHAT house? It’s such an honor,” said Harleigh Walker (she/her) of Alabama, who spent her fifteenth birthday at the White House. “I just want them to know we are just normal and we deserve the same rights and privileges as everyone else.”

Kylee Uradamo (she/her), 15, of California, interjected, agreeing: “we’re just people, just like anyone else on the street.” Nodding, Harleigh finished their joint sentence: “we’re just girls who happen to be trans.”

Admiral Levine shared on Twitter that it was “Deeply impactful to speak to some amazing trans kids at the White House. Gender affirming care is the medical standard and allows these kids to be themselves and live a normal life. To all trans kids: we see and support you. We have your back.”

In his own Twitter thread following the event, Second Gentleman Emhoff shared, “It was an honor to join Admiral Levine for a conversation with these wonderful families about protecting the rights of transgender youth in our schools and communities. To all our trans youth, you deserve to live in a country where you are treated with dignity and respect for exactly who you are. Our Administration is going to keep fighting to make that true.”

As dozens of bills in states seek to strip transgender and non-binary youth of their rights to education, health care, and support systems, these young people and their families shared their dreams, aspirations, and experiences of growing up in a supportive, affirming environment.

Janet Uradomo of California, Kylee’s mom, spoke through tears for all of the parents present when she expressed her hopes for her daughter. “I want Kylee to hear that she has a chance at life. I want her to be happy. I want her to have a good life, I want people to love her for who she is, you know? That’s all I want. That will make me happy. I want that for all our kids — not just because she’s trans, because she’s a kid! She deserves it. All of our kids deserve it, no matter who they are.”

Families were delighted by the many changes announced by the White House, but when asked, had many more policies they would recommend the administration prioritize next.

“All this anti-stuff in all the states that are happening, and for Kylee to hear all of that, that shows that people don’t love her and accept her and that’s got to stop,” said Janet. “Who cares? It’s not your life — leave them alone. If she knows someone like this, who is powerful enough, is behind her, hopefully she’ll hear that.”

“My kid’s health care isn’t optional, it’s so necessary,” said Myriam West of Texas, mom to 16-year-old Cameron Wright (he/him). “I’m not a child abuser for providing health care for my kid. I want that to be clearly law.”

“We’re just normal families, and it matters that people just let us be who we are,” Jeff Walker, father of Harleigh said. “Let our kids be who they are and stop trying to legislate what they feel an interest group wants to hear.”

Beyond the historic nature of this White House meeting with transgender and non-binary youth and their families, the event bears significance for the moment in history it is taking place. Several of the families in attendance hail from states which have passed, or are in the process of passing, laws that would diminish the humanity and livelihoods of these families by enshrining discrimination against transgender youths into law.

“Traveling to the People’s House with these incredible families is the ultimate celebration of TDOV and validation of years of advocacy effort,” said Andy Marra, Executive Director at Transgender Legal Defense and Education Fund (TLDEF) (she/her). “It is also fuel for the work ahead to ensure a bright and lasting future for all of our country’s trans and non-binary young people.”

“Seeing trans youth and their families welcomed by the White House was a powerful reminder of the dreams that our country, at its best, can make true: dignity, inclusion, and respect for all,” said NCLR Legal Director Shannon Minter (he/him). “Being at the White House and meeting with the Vice President, the Second Gentleman, and Admiral Levine meant the world to these families. If only state lawmakers in Texas, Florida, Arizona, Utah, and other states would take the time to meet these families, they would realize the terrible harm caused by laws that target trans children.”

"Trans kids just want to be kids," said Rodrigo Heng-Lehtinen (he/him), Executive Director at the National Center for Transgender Equality. "All young people deserve to have a safe environment to be themselves, and it is our duty as adults to ensure that trans youth are able to live their best and most authentic lives."

“These young people and their families who attended the White House event with Vice President Harris, Second Gentleman Emhoff, and Admiral Levine make it clear to the rest of us: no matter our genders, we all do better when we have the love, affirmation, and support we need to be ourselves,” said Brian K. Bond (he/him), Executive Director of PFLAG National. “PFLAG kids like Harleigh and Kylee—and all transgender and non-binary kids—deserve the freedom to learn, to get the health care they need when and where they need it, to travel, to bank, to get and hold a job, and to one day retire with dignity and respect. That’s a message they heard from our President and his administration, and PFLAG National will continue to work to make that a lifelong reality."

The National Center for Lesbian Rights (NCLR) is a national legal organization committed to advancing the human and civil rights of the lesbian, gay, bisexual, transgender, and queer community through litigation, public policy advocacy, and public education. Since its founding, NCLR has maintained a longstanding commitment to racial and economic justice and the LGBTQ community’s most vulnerable. www.nclrights.org

The National Center for Transgender Equality (NCTE) advocates to change policies and society to increase understanding and acceptance of transgender people. In the nation’s capital and throughout the country, NCTE works to replace disrespect, discrimination, and violence with empathy, opportunity, and justice. NCTE envisions a society in which transgender people not only survive, but thrive.
Press Contact: David Farmer
press@transequality.org | (207) 557-5968

PFLAG National is the first and largest organization for lesbian, gay, bisexual, transgender, and queer (LGBTQ+) people, their parents and families, and allies. With nearly 400 chapters and 250,000 members and supporters crossing multiple generations of families in major urban centers, small cities, and rural areas across America, PFLAG is committed to creating a world where diversity is celebrated and all people are respected, valued, and affirmed. To learn more, visit pflag.org.
Press Contact: Laura McGinnis, PFLAG National Media Relations Manager
lmcginnis@pflag.org | (202) 725-7571