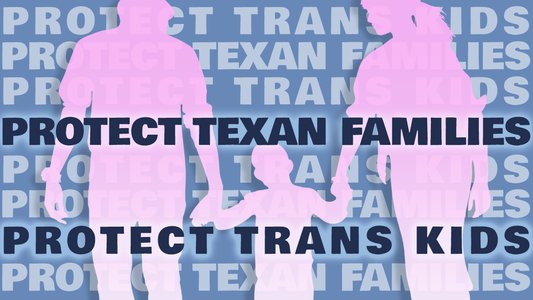 The amicus brief asks the state’s highest court to affirm the lower court’s injunction, which stopped the state’s enforcement of a transphobic directive that exceeds the governor’s legal authority and "violates the sacred rights of Texas parents and their transgender children." Amici rely on the temporary injunction in place to prevent irreparable harm to them through the loss of lifesaving, medically necessary health care.

In the brief, families and organizations share the painful stories of how the Governor’s order has already harmed them and those they love.

Parents A. and M. (names withheld for their protection) told the court that their child has come to believe removal by DFPS is imminent, asking “when I go to foster care, will they have macaroni and cheese?” and “when I get put up for adoption, what does that mean?” before admitting they are resigned in the fear that “no one would adopt me because I am trans.” These conversations are devastating to the family, causing A. and M. to consider moving out of Texas, the only place their child has ever lived.

"We are so proud of the courageous young people and their families that have told their stories, here, but also so horrified by all that they have gone through, in only a matter of weeks, due to this horrifically cruel policy," said Emmett Schilling, Executive Director of Transgender Education Network of Texas (TENT). "We are depending on the Supreme Court to uphold the law and not allow our state's leaders to abuse their administrative power."

“Parents, young people and advocates are still out here demanding the state protect our children instead of attacking them; though we are all traumatized and weathered by this constant barrage of hateful policies, we will continue our work to defend the rights of transgender children and their loving families during this harrowing time," said Ricardo Martinez, CEO of Equality Texas. "One of our most active families has had to move out of state, telling me they are 'tired of fighting this hard' just to exist, here, and that their child's mental health has to come first over everything -- that's not abusing your child, that is loving them.”

The effect of this sort of political attack on transgender youth and their families is readily apparent. In 2021, The Trevor Project, a national non-profit organization that provides a toll-free hotline for crisis intervention and suicide prevention for LGTBQ+ youth, reported that more than 50% of transgender and nonbinary youth had seriously considered suicide, and 75% had reported experiencing generalized anxiety.

“For the sake of their health, security, and freedom from criminalization, the status quo prior to the issuance of the Governor’s Directive must be maintained,” the brief states.

Attorneys for amici argue that the Court of Appeals properly exercised its discretion under Rule 29.3 to accomplish this, and its Order must be upheld to protect Texans from imminent and real harm.

"As the Department of Justice has just reminded states' Attorneys General, denial of medically-necessary care is a violation of the Constitution and federal law," said David Brown, Legal Director at Transgender Legal Defense and Education Fund (TLDEF). "As our amicus brief outlines, it is not only unconstitutional but unconscionable, making parents choose between denying their children the care on which they rely, which could have irreversible negative health outcomes, including risk of death, or be forced to leave the state, effectively becoming refugees."

Pro bono partners were vital to the effort to get this brief completed with the urgency and rapidity required by the dire situation that our clients in Texas face.

“We are proud to represent Equality Texas and the Transgender Education Network of Texas on this critical matter as these organizations continue to advocate for and protect the rights of transgender Texans and their families,” said Cassandra Mott, Partner, Blank Rome LLP. “It is clear that the state’s directive silences families and other caregivers of transgender children, deprives them of their rights to determine the appropriate medically necessary care for their children, and places the physical and mental well-being of transgender children and young adults at risk.”

"Our Baker McKenzie pro bono team recognized the immediate need to amplify the voices of the children and families affected by the state's recent directive," said Rick Hammett, partner at Baker McKenzie. "We were proud to lend our time, energy and legal expertise to this critical amicus brief, which articulates the tremendous and irremediable harm our clients are facing."

Key quotes from the brief: