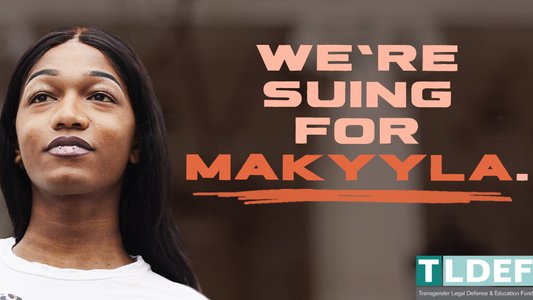 (BROOME COUNTY, NY – MARCH 29, 2022) Twenty-three-year-old Makyyla Holland (she/her/hers) filed suit today against Broome County, the Broome County’s Sheriff and officials at the County Jail seeking redress for violence, threats to her safety, denial of medical care, and discrimination inflicted on her because she is transgender. Her lawsuit seeks to ensure no other transgender people are subjected to such abuses while they are in custody.

During the six weeks Holland spent in County custody, the Broome County sheriff’s office and its corrections officers discriminated against Ms. Holland on the basis of her sex, transgender status and disability; beat her; subjected her to illegal strip searches; and denied her access to prescribed medications, including antidepressants and hormone treatments, triggering severe withdrawal symptoms. In a complaint filed in the U.S. District Court for the Northern District of New York, attorneys from the Transgender Legal Defense & Education Fund (TLDEF), the New York Civil Liberties Union (NYCLU) and pro bono counsel Paul, Weiss, Rifkind, Wharton & Garrison LLP argued that this abuse violated Ms. Holland’s rights under the Fourth and Fourteenth Amendments, Americans with Disabilities Act, and numerous other federal and state laws.

“I was humiliated by Broome County jail staff because I am a transgender woman. I was harassed, mocked, misgendered and worse: jail staff strip-searched me, beat me up, placed me in the male section of the jail, and withheld my hormones for a period of time, forcing me to go into agonizing withdrawal,” Ms. Holland said. “No person’s gender identity gives jail staff the authority to harm them, and Broome County law enforcement and jail staff must be held accountable for their actions. The abuses that police and jail staff across New York state commit against transgender New Yorkers must end.”

As the complaint details, when Ms. Holland entered the jail’s custody, she was physically attacked by male officers after expressing fear of stripping in front of them given that she is a woman. The jail then housed her in a men’s facility, where she was forced to shower in full view of male staff and men in custody. At various times Ms. Holland was placed in isolated confinement because of her transgender status. She was repeatedly denied access to bras, women’s underwear, deodorant and cosmetics that are provided by Broome County Jail to women in custody. Along with being without hormones for nearly four weeks, Ms. Holland was told by a nurse that the “county wasn’t going to pay for” her prescribed medication to treat depression and anxiety.

The lawsuit asks that the court affirm that transgender individuals are entitled to be housed in jail facilities consistent with their gender identity, to receive gender-affirming care, and to be otherwise treated with dignity in a manner consistent with their gender identity. It also seeks damages to compensate Ms. Holland for the harm she suffered.

“No one should be subjected to violence, forced into unsafe housing conditions, or denied necessary medical care while in jail,” said Shayna Medley, staff attorney at the Transgender Legal Defense & Education Fund. “When county and jail staff single out transgender people for this kind of mistreatment and abuse, it violates the Constitution and federal and state law.”

For transgender, gender nonconforming, nonbinary and intersex (TGNCNBI) people, jail disproportionately results in harassment, degradation and violence. This is especially true for Black people, Indigenous people and other people of color. One in six people who identify as transgender report being incarcerated at some point in their lives – and this figure jumps to nearly three in six for Black transgender women. In a 2021 survey of transgender and non-binary people incarcerated in New York State, 95 percent of respondents said correctional staff used derogatory names to refer to them.

New Yorkers like Makyyla will continue to suffer in jails and prisons across the state unless there is broad action from lawmakers. The Gender Identity Respect, Dignity, and Safety Act in the state legislature would increase safety for TGNCNBI people by requiring that prisons and jails provide housing placements consistent with one’s gender identities, unless they request otherwise. The bill would hold jail and prison staff accountable for respecting a person’s gender identity in all contexts, including name and pronoun use and require access to clothing, grooming and toiletry items.

The American Medical Association (AMA) has affirmed the need to house transgender people in facilities that “are reflective of their affirmed gender status, regardless of the [person’s] genitalia, chromosomal make-up, hormonal treatment, or non-, pre-, or post-operative status.” Similarly, the World Professional Association for Transgender Health (WPATH) specifically calls on jails and prisons to “take into account [a person’s] gender identity and role, physical status, dignity, and personal safety.”

“The mistreatment and abuse of transgender women by jail and prison staff is widespread across New York State,” said Bobby Hodgson, supervising attorney at the New York Civil Liberties Union. “Thanks to Ms. Holland’s courage and persistence, we’re taking action today to make it clear that jails and prisons statewide have an obligation to treat transgender people with dignity. We will continue fighting for the safety of transgender people across New York State.”

Today’s lawsuit follows a landmark settlement the NYCLU and TLDEF reached with Steuben County in August 2020 establishing one of the strongest jail or prison policies in the country protecting the rights of transgender, gender nonconforming, nonbinary and intersex people in custody. This policy addressed housing placement, safety, access to medical care, name and pronouns use, search procedures and grooming standards. It was negotiated with the involvement of the New York State Sheriffs’ Association and can serve as a model for jails across New York state and the country. In Miami-Dade County, TLDEF, Harvard Law School LGBTQ+ Advocacy Clinic and the Southern Poverty Law Center (SPLC) have filed suit on behalf of three transgender people arrested while protesting for Black lives in 2020, seeking the adoption of a similar model policy.

You can find materials on the case here: https://www.nyclu.org/en/cases/makyyla-holland-v-broome-county-et-al