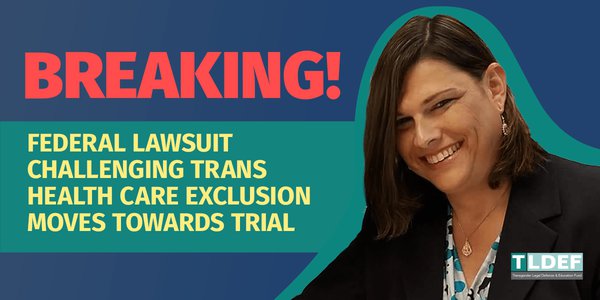 (MACON, GA – October 30, 2020) - A U.S. District Court judge today denied Houston County, GA officials’ request to dismiss a lawsuit filed last year challenging the exclusion of all transgender-related health care from the County’s employee health plan, which is administered by Anthem Blue Cross and Blue Shield. In a 37-page opinion, Judge Marc Treadwell considered the plaintiff’s assertions that Houston County not only adopted this exclusion without providing any lawful rationale but did so “despite Anthem’s warning that their exclusion of coverage was ‘unlawful.’” Judge Treadwell ruled that if these claims are proven at trial, then both Houston County and Sheriff Cullen Talton have violated the U.S. Constitution and federal law.

The lawsuit was brought by Sergeant Anna Lange, a Houston County Sheriff’s Deputy with 23 years’ experience in law enforcement who was illegally denied medically-necessary care under her employee health plan, which explicitly excludes coverage for transgender care. Sergeant Lange repeatedly approached her public employer but was repeatedly denied.

“I’ve dedicated more than twenty years of my career to serving my community and I have never asked for or wanted special treatment for being my authentic self,” said Sergeant Anna Lange. “Since day one, this lawsuit has simply been about challenging the County’s illegal exclusion that prevents me from getting the medically-necessary care that I need. Today’s decision means that transgender Southerners like myself are one step closer to receiving the equal and fair health care access that everyone is guaranteed under the law.”

“We commend the Court’s decision to deny the motion so we can show a jury how Houston County officials and Sheriff Talton illegally and unconstitutionally denied health care coverage to Sgt. Lange,” said David Brown, TLDEF Legal Director. “The Supreme Court’s recent decision in Bostock makes it abundantly clear that discrimination against transgender people is illegal. In moving toward trial, Sgt. Lange’s lawsuit aims to make it explicit that transgender people cannot be denied access to medically-necessary care.”

“As a result of Judge Treadwell's decision, Sgt. Lange will have the opportunity to prove that the exclusion of medically necessary care for the treatment of gender dysphoria under Houston County's health plan is unlawful and violates her constitutional and statutory rights under Title VII and the ADA,” said Wes Powell, partner at Willkie Farr & Gallagher LLP. “We look forward to vigorously pursuing her claims and putting an end to this blatant discrimination against a dedicated law enforcement officer."

In the lawsuit, TLDEF attorneys argue that Houston County officials are violating the Equal Protection Clause of the U.S. Constitution, Title VII of the Civil Rights Act of 1964 by unlawfully discriminating based on sex, and the Americans with Disabilities Act.

Only a few cases have brought claims using the Americans with Disabilities Act (ADA) arguing the statute prohibits discrimination when transgender people seek medically necessary care for transition-related purposes. In Blatt v. Cabela’s Retail Inc., a federal district court ruled for the first time that transgender people can seek relief from discrimination under the ADA.

In June, the Supreme Court’s 6-3 decision in Bostock v. Clayton County, Georgia affirmed that discrimination against transgender people is prohibited under Title VII of the Civil Rights Act of 1964. Sgt. Lange's lawsuit against Houston County challenges her denial of health care coverage because she is transgender. Sergeant Lange’s case is the second brought in the South in which a motion to dismiss by a public-sector employer seeking to defend an anti-transgender employee health plan was denied over the past year. The other federal lawsuit, Kadel v. Folwell, was also litigated by TLDEF, jointly with co-counsel.

Dates for a trial where Sgt. Lange will prove her case to a jury have yet to be set.

According to a prominent national survey about transgender health, more than half of respondents who sought health care coverage for transition related surgery were denied. Transgender people living in Southern states are regionally the most likely to be uninsured. For those who do have access to health care, one in four have experienced a problem with their insurance in the past year related to being transgender, such as being denied coverage for care related to gender transition. These statistics illustrate that transgender people are systemically underinsured and that having access to health coverage does not necessarily mean that it will include transgender-related care.

All mainstream medical associations, including the American Medical Association (AMA) and the American Psychological Association, recognize that transition-related care is both medically necessary and life-saving. The AMA and other medical organizations have called for an end to discriminatory exclusions of transition-related medical care from public and private health insurance policies.